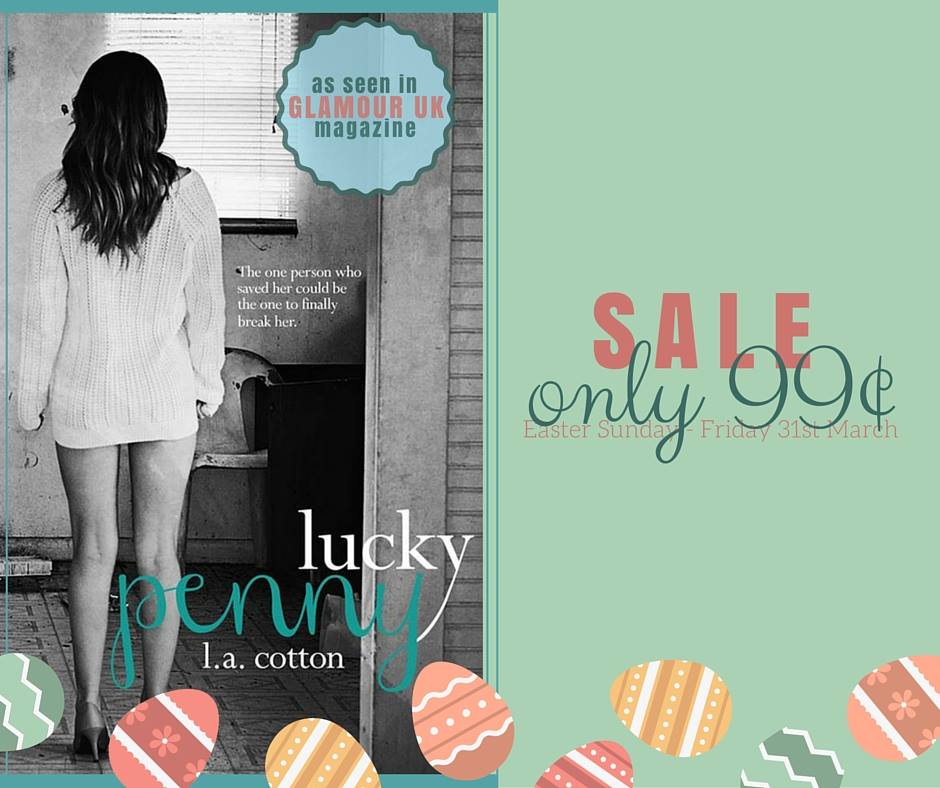 I was his lucky Penny. He was my light in the dark, hope in despair. Our bond was one of survival, friendship… first love.

But then we were ripped apart and Blake Weston became the memory I turned to when everything else in my life fell apart.

Seven years later, a summer working at Camp Chance is supposed to be my fresh start. Beautiful scenery and the chance to better the lives of foster children – kids like me. But when my eyes land on him across the fire, time stands still and feelings come rushing back to the surface. I thought I’d moved on, tucked him away in my heart. One look into his soulful blue eyes and I know I’m wrong. Blake Weston can heal the broken parts of me. Restore my hope. Love me.

It’s our second chance. A sign we are supposed to be together.

But in my twenty-three years, Blake Weston might just be the first thing I won’t survive.

WARNING: This book contains references to abuse that some readers may find distressing. 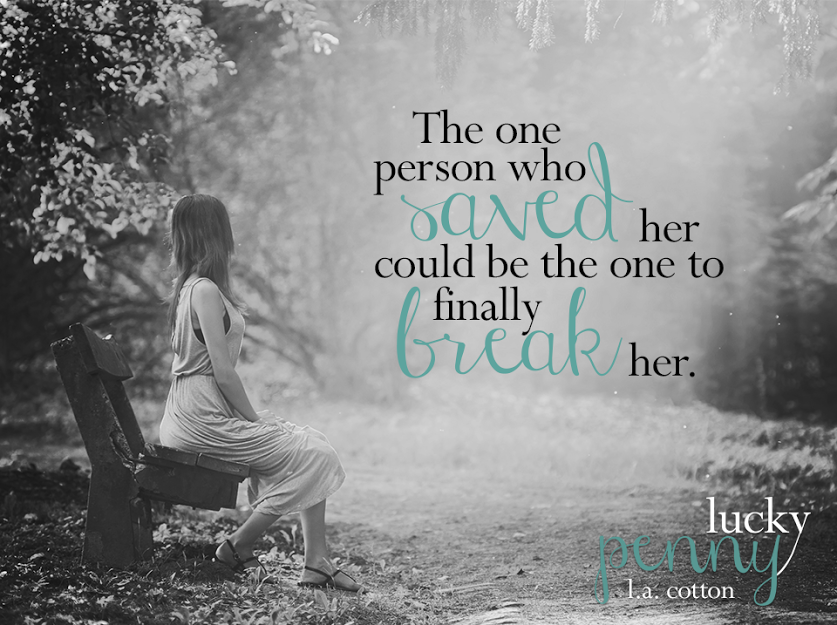 “Oh, come on, Penny. I know you two have a rough history, but it’s just that, history. In the past. You can’t let your past dictate your future. Mold you, sure, but define you? Nuh-uh! The Penny I’ve watched grow over the last couple of months is stronger than that.”

Most days, I didn’t feel it.

I’d made progress, sure, but the truth was that I was still tethered to the ghosts of my past in ways I hadn’t even realized until I saw Blake again.

So much pain tainted our story, I didn’t know if we could rewrite ourselves a new ending… or beginning.

“You’re overthinking this.” Marissa took my hand in hers. “I’ve watched the two of you together. Everything you felt for Blake all of those years ago is still there. It’s written all over your face every time you look at him. And I don’t doubt for a second that it’s the same for him.”
Warmth spread into my cheeks, and I dropped my eyes. Why couldn’t I just be normal instead of damaged and confused and terrified to step out of the shadows?
Why couldn’t I let myself live in the moment for once.
“I know you’re scared,” Marissa went on. “And that’s okay. But tell me one thing, Penny. Can you live with yourself if you leave here without giving him a chance? A real chance?”
I looked over at the lake where Blake’s group was attempting to cross the water on homemade rafts. His polo shirt clung to his chest as he helped a boy onto the floatation device.
“Well, can you?”
Could I?
Blake had healed me once, and then he had broken me in a way from which I never truly recovered. But somewhere over the last two months, he had started to put me back together. Piece by piece. My head had warned me, tried to keep me away, but my heart recognized him. They called to each other, sought each other out.
Blake already owned my heart.
He always had.
But could I give him my damaged soul as well? 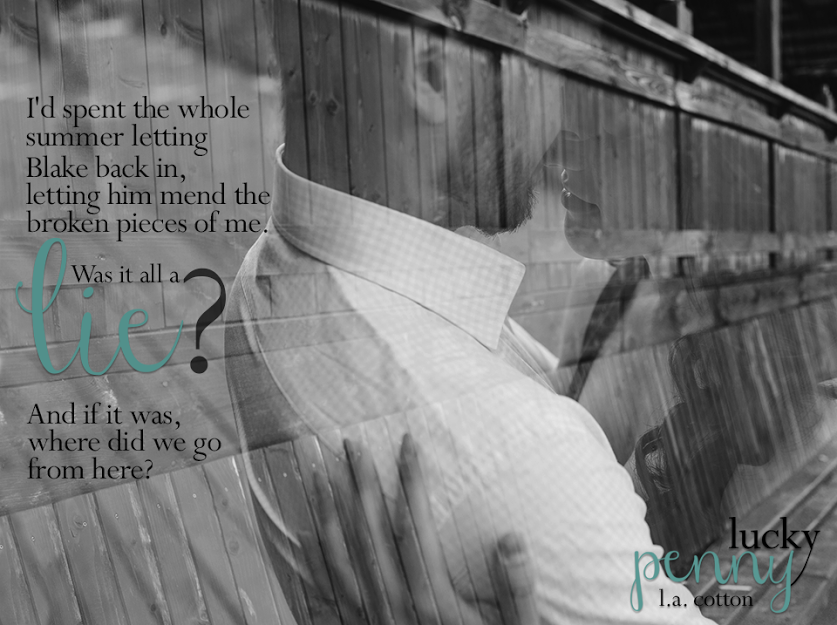 5 STARS
“Wonderful story of love and friendship” ~ By Mollien Osterman Alpha Book Club
5 STARS
“Perfectly Heartwarming” ~ By Sarah Griffin
5 STARS
“L.A Cotton never fails to surprise me with her amazing stories. First there was the Fate’s Love Series, then came Chastity Falls series (oh, Jackson) and then Lucky Penny.”  ~ By Jade!
5 STAR
“A Great Second Chance Read .” “ I loved this story. It is so beautifully written. …If second chance loves stories with angst are your thing, . . “ ~ By Renee 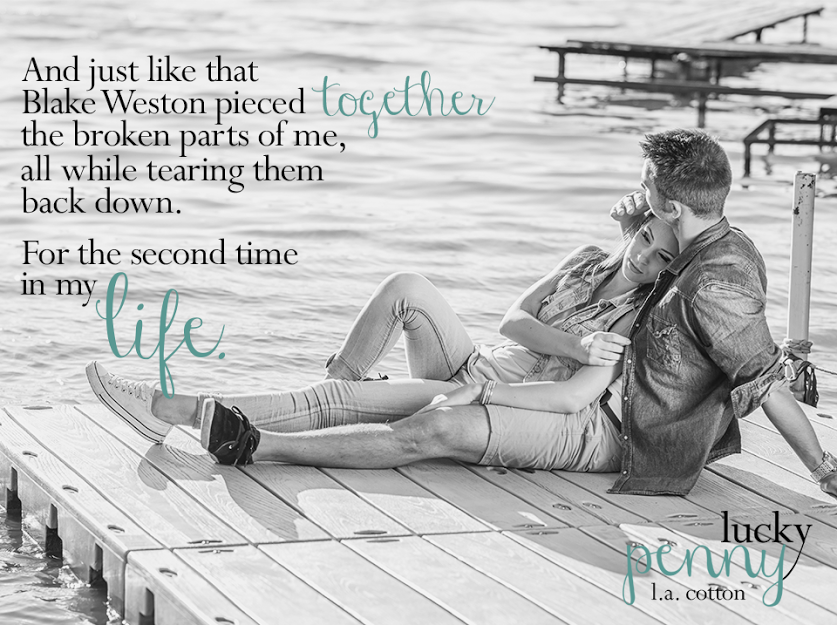 Mama’s Thoughts:
This was a beautifully done story of surviving against all odds, and finding, or trying to hold onto, true love.  Though I did have some issues with Blake’s character, they would be spoilers so I won’t go into detail, just that he didn’t own up to some things or take responsibility when he should have and he was too pushy about certain things.  Otherwise, I was entranced and completely wrecked by the emotional intensity of this book. Penny was a great example of what surviving abuse can really be like, and the fact that different types of abuse affect people in different ways.  Too many times books dealing with this subject aren’t very sensitive to its readers, but that was not the case with Lucy Penny.  It was handled in such a way that you became a part of the story without feeling like you were violated, too.  Definitely not for those under 18, but I’d recommend this to anyone who doesn’t have an aversion to reading anything that even mentions the topic of abuse. 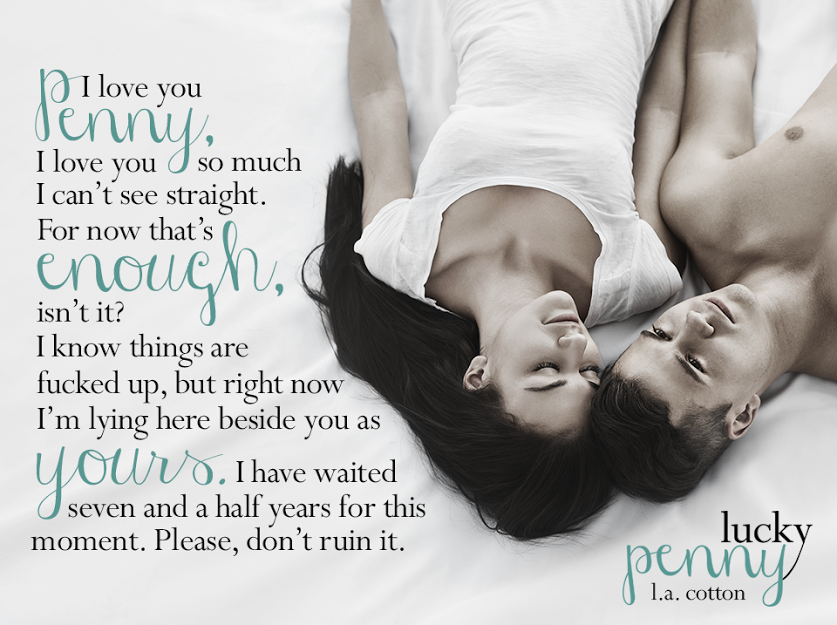 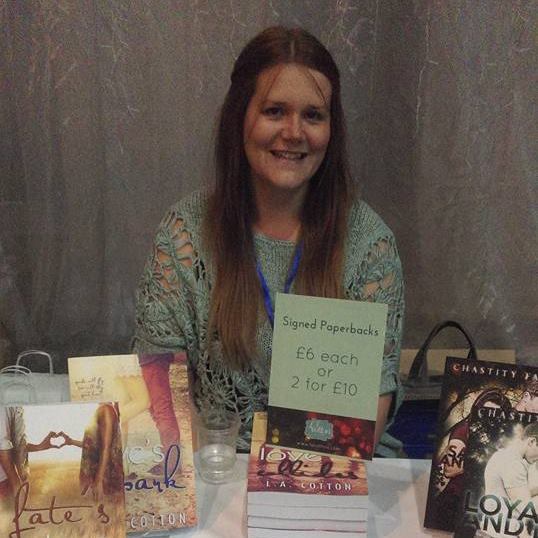 Contemporary romance and romantic suspense … written with feeling
L.A is author of contemporary romance novels ranging from sweet with just a hint of steam, to suspenseful reads full of angst, tension, twists and turns. Home is a small town in the middle of England where she currently juggles being a full-time mum to two little people with writing. In her spare time (and when she’s not camped out in front of the laptop) you’ll most likely find L. A immersed in a book, escaping the chaos that is life.
Official Website
www.lacotton.com
L A loves connecting with readers. The best places to find her are:
www.facebook.com/authorlacotton
www.twitter.com/authorlacotton
www.instagram.com/authorlacotton
Or you can email her at:
contact@lacotton.com